After connecting an iPhone or Apple Watch to a car with a CarKey via the Wallet app, users simply need to bring the iPhone or Apple Watch closer to the car’s NFC reader. It authenticates Face ID or Touch ID to open the door. Once in the car, you can place your phone on the Qi wireless charging pad and start it to start moving.

If you do not like Face ID, users can turn on Express Mode to open the car door without face authentication. According to The Verge, CarKey also allows to send the right to open the car door to a friend via iMessages. The special thing is that CarKey supports both iOS 13 and not only iOS 14.

Before CarKey, many car manufacturers had developed their own electronic keys. But they have to install each company’s application, not integrated directly into the operating system like CarKey. With CarKey, users can connect multiple cars to store keys for them.

According to Apple, the first car to support CarKey will be the 2021 BMW 5 series expected to launch in July. Currently, CarKey only uses NFC.

But in the future, Apple will develop connectivity standards for CarKey to take advantage of U1 (Ultra-Wideband) chip on current iPhone 11 series. WWDC 2020 event is an opportunity for Apple to bring the iOS 14 beta to developers and many important announcements. 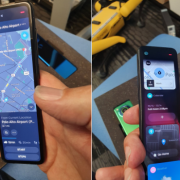